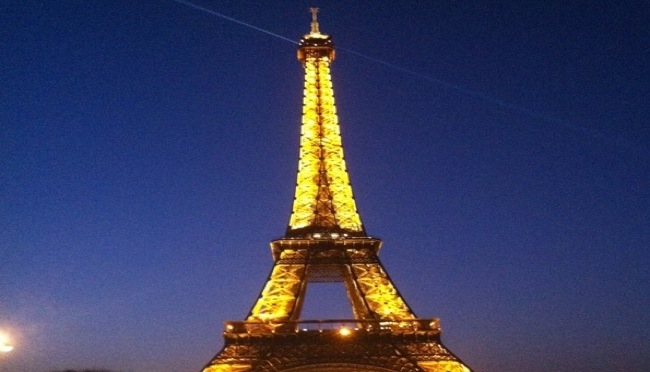 I’ve already enjoyed a number of transformative meditations here in Paris – alone as well as with others. And I was meeting a friend later tonight for another shared session. So, at this point, I was not planning on a meditation for the evening. In fact, I was taking some time for myself to enjoy the sights – it has been a while since I’ve been to Paris.

But alas, if there is one thing I have learned on this trip, it is to not make assumptions about what I have planned and what is being planned for me. I trust the process and magic of serendipity…

On my way to see the Eiffel Tower I get lost. Again!! Except of course, one cannot really get lost in Paris, one can only wonder around drinking in the glory of the city. I walk and walk and walk and then finally, because there is a bit of time consideration, I get a taxi to bring me the rest of the way.

The sun has already set, so I can see in the distance that the Tower is already lit up. No matter how many times I see the Eiffel Tower, I am amazed by how big it is. How grand it is. How larger-than-life it is.

It is glowing, gleaming, glorious. Damn she is beautiful!

The plaza is filled with people, hundreds of people. It is buzzing…and that is the funny part, because with all of these people it is simply buzzing. By contrast, I experienced last week the Djema El-fna Plaza in the Medina of Marrakesh screaming with unbridled excitement and rush.

Continuously this trip has revealed to me multiple layers of contrasts.

So, knowing that this is a buzzing but calm crowd, and although it’s dark, it is the Eiffel Tower. And I know, I know, I know that I must do a public meditation. Right here. Right now. On the spot. No fanfare, no announcement, just do it.

OK, it’s my first time meditating out in the world at night. So first I assess whether it is indeed safe. There are many vendors hawking wares, but they are generally aggressive only in the aspect of trying to make a sale as opposed to hassling women who are alone…we will see.

It is easy to find a spot and so I don my sunglasses and settle in. I wonder if it is going to be too much of a distraction. The crowd is mild, but the Eiffel Tower is Positively Looming! Let’s give it a try.

Surprisingly, the first thing I notice is how still I immediately become. Not just still, but statuesque. Still. Unmoving. Grounded. At home I can sit still for long periods of time, up to 2-3 hours at a time. But this is different. This is deeper and instantaneous.

Then I realize that I have tapped into the Tower! It had the opposite effect of what I assumed, imagined, supposed. Another contrast. Rather than the anticipated distraction, The Eiffel Tower was instead grounding me. Clearly there was no use in trying to dictate this meditation (as if there ever is – ha!) I am a passenger on this journey. Really this is an opportunity to sit back – or in this case, sit still – and let it take me.

Having my martial arts training ingrained in me, I am always aware of my surroundings, especially in a new environment, especially in the dark, even as I surrender to the force of the Tower. At one point I heard the crunching of gravel as someone approached me, a vendor. “Excuse me, Madame…” But I knew he has commissioned sales to make and he knows the cues for who is a buyer and who is not. I am clearly not – sitting perfectly still, completely straight, dark glasses. He left promptly.

For this meditation, there was no monkey mind – just a visual and unexpected journey. The images that came to mind were the contrasts between temporary and permanence.

Permanence has change in it, but because it so much slower or perhaps vaster, permanence doesn’t represent change, it represents presence amidst change.

I saw an image of the tower and all of the people milling about…with a sense of urgency of a time elapsed film I saw those people leave and then the next group arrived. They too left and then the next group came and left and so on all through the history of the 120 plus years of the Eiffel Tower. Coming and going. Coming and going. The people were the temporary expression while the Tower just stood with permanence. Weather, seasons, years, politics, construction, and a river of people all represented the aspect of temporary as the Eiffel Tower stood still and glorious and dignified. Then I saw my own temporariness, my own body spring forth and then decay while the Tower stood.

Abruptly I saw the Tower gone. Not so much having disappeared, but rather not having been at all. The time before the Eiffel Tower was built a mere 122 years ago. I sensed the place in Paris before La Tour Eiffel, and then the place on the earth we call Paris, before France, before Europe, before countries.

Suddenly in that moment of realization that which previously seemed permanent, the Eiffel Tower, became the temporary. And I notice myself again. Not my body, but my soul. I noticed that my presence shifted from the temporary, my body, to the permanence, my soul.

I was absorbing the permanence and length of my soul when my body martial arts awareness kicked in and I heard the gravel crunching again of someone approaching.

Two men…jovial, playful, slightly drunk. And Way Too Close To Me.

I flashed open my eyes, stood up and walked off. Possibly an abrupt sight, but my awareness alerted me to get moving, change locations immediately

Ah, the beauty of contrasts, of the yin and yang, the back and forth, the lovely and delicious balance of the permanence and the temporary…and back again.

And that was my Nighttime, Public, Out In The World, Eiffel Tower Meditation.